Artworks Inspired by a Journey Across Northern India

The India monotype prints on show here are inspired by two trips made to India in January 2018 and February 2019 and in some ways are a development of my previous body of work examining Bird Women.

The Kite series are inspired by life in the ancient city of Varanasi on the banks of River Ganges. Pilgrims come in their thousands to burn their dead on the ghats, to bathe in the sacred River as part of their Hindu rituals and to visit the many temples on offer. Varanasi is a place very much built upon, and still governed by, religion, rituals and myth. Flying kites has become an integral part of the celebrations of the New Year, called Makar Sankranti, usually around the 15th January. It marks the northward movement of the earth in the celestial sphere and it is said that it is the day when the direction of the wind changes bringing with it the spring weather and plentiful harvest. Everywhere, people look to the brighter skies and watch their kites flutter in the breeze, even though most flying is done at sunset, after the day’s work is over.

At ground level, another story emerges. Everywhere the debris of the kite flying littered the busy streets. Nests of tangled nylon strings choked cows and ensnared birds and monkeys. More deadly was the illegal Manja, made by taking normal kite line and coating it with glue, dye and glass, to enable the user to ‘cut’ their opponent’s string, and claim their kite. This ‘string’ was as sharp as a razor and many people had already been treated for facial cuts with stories of motorcyclists cutting their throats on the deadly threads. Everywhere tattered tissue and bamboo kites floated in the already polluted Ganges river and hung from the overhead lines and trees like multicoloured mystical flags.

The theme of the red threads, used throughout these works, represents the deadly ‘manja’. The string ties the kite to it’s owner, like a free thing that is tethered, until it is cut by an opponent where it then becomes the same string that binds and kills animals and injures people. The Garuda artwork is based on both the mythological bird (said to be born from a peacock’s feather) and the yoga madras, or hand movement of the same name. I also liked that the hands, when coloured brown resembled the India Kite, a bird of prey that often is ensnared in the Manja. The hands represent that caring more for nature is all in our hands if we want to break free from the bad habits that tie us.

The central and largest piece is based on the universal idea of the Punnai (wishing) tree. The tree seems to be in good health but trapped in its branches are objects of man’s desire. There it was kite flying, money and how to get on a plane to a better, more prosperous place. At the roots are the bones of the dead, but rather than human skeletons I have made them the bones of dogs, as these faithful animals are not valued in India as pets as ‘You cannot make money from a dog’, one man said. This piece is made to reflect the conflict of life and death in India, how man destroys his riches that nature has given him, but in the end, we will feed those riches back with our bodies, when we are gone.

Parvati and the Peacocks

In Chennai, we visited the ‘Arumigu Kapaleeswarar Karaganmbal Temple’, famous for it’s association with peacocks. Outside the temple there were sellers of peacock feather fans and inside many of the colourful edifices featured the grand bird. According to the ancient legends, the Goddess Uma asked Lord Shiva to teach her a mantra. He consented and started to teach but she was distracted by a beautiful peacock. Shiva, known for his temper flew into a rage and turned Uma into a peacock and she was advised to perform penance in the form of worship of him under the sacred Punnai Tree. Eventually he recognised her devotion and removed the curse taking her for his consort/ wife. Uma is also known in the North as Parvati.

The peacock is the National Bird of India and it is revered and worshipped. However, when we visited in January, there was the kite festival of Makar Sankranti (new year) where young men took to the rooftops in the evening to fly their kites. Part of the game was to ‘cut’ down an opponent’s kite so strings are coated with glass particles to help this cutting action. Everywhere are kite strings, knotted and dangling from trees, telegraph poles and buildings and lying in deadly nests of nylon on the street. We rescued at least 3 dogs  from entanglement and stopped a cow eating some on one walk, but the thread is often more deadly. The sharp glass threads, or Manja, ensnares many birds in trees or cuts their wings so they cannot fly. We even visited a famous Jain bird hospital in Delhi that tries to rescue poor souls that meet this fate.

The two peacocks represent two parts of this story. The first is Parvati’s peacock, that fatefully attracted her attention and made Shiva angry, the second, the reversed bird is ensnared in a prison of ‘Manja’ kite string, like Shiva’s imprisonment of her at the temple. The birds embody the two aspects of India that I felt: the grand and beautiful side that loves to show off and be colourful, against the darker, more deadly consequences due to people revering entertainment of preservation of nature. 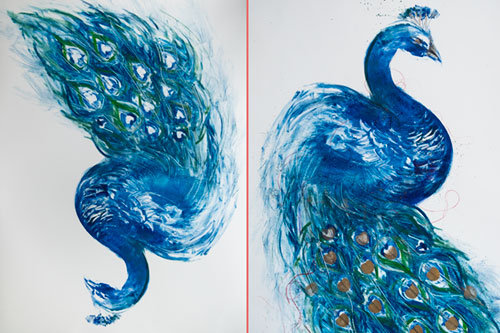 Many of the works below formed part of my solo show at the Glasgow Print Studio in 2018 and then also were included in a mixed show of artists at the Union Gallery in Edinburgh in 2019. Two works were also selected for an exhibition in the prestigious Royal Glasgow Institute (RGI) show early in 2020.